The SHS Courier • May 17, 2019 • https://theSHSCourier.com/4779/entertainment/the-campiest-outfits-from-this-years-met-gala/

The campiest outfits from this year’s met gala

The Met Gala. The biggest day of the year for fashion. Also known as “Met Gala Monday” because it’s on the first Monday in May every year. All the A list celebrities would kill to be invited to the Met. One table costs about $300,000 and a head costs $30,000, and you still have to be invited to the Gala. For me, the stars and cost aren’t on my mind, it’s all about the dress. Each year, the Met has a new spontaneous and creative theme. This year, the Met Gala fell on May 6, and the theme was Camp.

When I first heard camp, I thought how do you dress for Camp? Wear boots and shorts, while roasting marshmallows? But that is the exact opposite. Camp is so bad it’s good. The aesthetic of Camp is outrageous and way beyond the norm. The idea of Camp was brought up from the essay “Notes on ‘Camp” by Susan Sontag. Sontag discusses how Camp is not natural to talk about because it is simply unnatural. It’s the way you see the world and stylize your vision and creativity.

Now that you have a little idea of what Camp really means, let’s see how this year’s celebrities interpreted and dressed for the theme.

This first celebrity is the definition of Camp: Lady Gaga. Now, Gaga has worn everything from meat dresses to 10-inch heels, but these past few years she has toned down her style to be more simplistic. Camp brought out her monster again with a total of four outfits on one carpet, making her entrance about 16 minutes long. Gaga first came out in a hot pink dress with a huge bow in her hair and the longest eyelashes you have ever seen. After she unzipped from her bulky hot pink dress, she had on what seems to be a simple black dress. While it starts to look like a normal black dress, you see it has one huge puff on only one of her hips. Next, she slipped out of black and into a gorgeous pink silk dress. Lastly, Gaga undressed (literally) from her pink dress into a bedazzled bra and undies with fishnets, and you can guess what’s next. Her fabulously well-known 10-inch heels. What you may be thinking is “Wow! No outrageous animal print, no feathers, no meat, no nothing?” But she didn’t just change four times, she also put on a performance. As Gaga walked the pink carpet she had dancers all around her twirling her dress, and she had props like a fake phone and a wagon. It was a silent performance that was truly Camp.

The next dress is a childhood dream. It was worn by Zendaya. She came out in a blue ball gown, and you knew right away that she was Cinderella from the look of the dress and her hair. It didn’t stop there. Her escort was dressed as a male fairy godmother (breaking sexuality norms, cough, Camp, cough), and the next thing you see is his wand pouring out fog and whirling around Zendaya as her dress magically lights up and opens wider. The moment was a scene from a real-life fairy tale. Following in Gaga’s place, Zendaya also put on a show from the light up dress, and then she walked up the stairs, paused and continued up the stairs, leaving a glass slipper behind her. She really took the character of Cinderella and made it her own on a red carpet. It was an astonishing sight to see.

One of my favorite actresses and an inspiration to me is Lily Collins. This was not Collins’ first rodeo at the Met, but her outfit was a stunner nonetheless.  Collins wore a beautiful white, short dress with a long train in the back, ruffles and mesh underneath. Her glamorous Cartier necklace pokes out of the V. Collins may not have put on a show like Gaga and Zendaya, but she wore a story that didn’t need to be acted out. Collins recreated the look of Priscilla Presley’s wedding day outfit. She took the character of someone else and made it her own. Now Presley’s wedding gown wasn’t the definition of Camp, so Collins had to turn it around herself. By added the hair, makeup and style of the shoes someone would most likely not wear that on their wedding day. Exactly why Collins fits the Camp theme. She had inspiration, used it and made it her own with a few funky twists. She took a piece of history and made it come back to life.

Now for a male review of the Met: Harry Styles. This year’s Camp theme was huge for ignoring the masculine style line that is expected for men to wear (suits, ties, dress shoes, no makeup, etc). Styles was a co-chair of the event this year. He broke all the rules of masculinity by wearing a feminine mesh top. Someone may think that this outfit isn’t crazy, but would you ever see a man wearing nail polish and dangle earrings. I think not. Styles was not the only one who supported the dressing of different sexuality, but it is a big step for equality in this world because he is a straight guy that is showing a difference. Not only was this a huge thing for human rights, but it also fits perfectly with the theme. Styles topped off the whole look by wearing patent leather boots, but not just normal looking boots, heels: the most impactful shoe a man can wear to break down social norms. 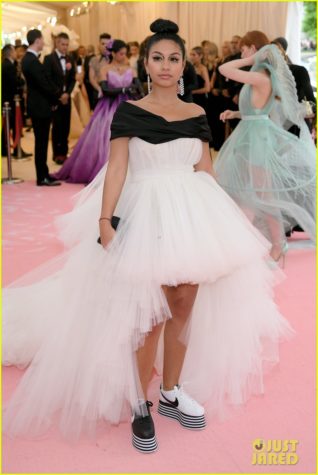 The final dress was worn by the one and only Alessia Cara. There is no doubt that Cara wore one of the comfiest people at the Met. For all that don’t know, Cara loves to keep it simple and show girls that you don’t have to wear makeup and look nice to be beautiful. Maybe it was hard for Cara to dress all fancy when it may belittle her message, but she still held true to herself. Her dress is a lot of fabric and obviously fancy, but she added the Nike tennis shoes (which I need) and unique makeup that is not seen often. Cara definitely did not wear an out of this world Camp outfit, but considering her normal style, she stepped out for wearing a (half) ball gown and also stayed true to herself wearing tennis shoes.

In the end, all the celebrities I named look fabulous and outrageous in their own way. I would recommend to anyone to go and look at all the styles from the Met. Some celebrities really outdid themselves, but it didn’t even matter because it’s Camp. I one day dream I will be able to walk the carpet of the Met Gala and show off the best look I could ever pull off.