The impact Girl Up has on young adults 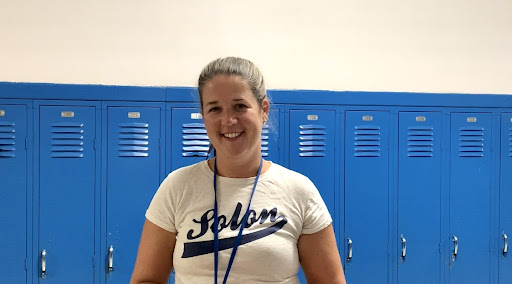 Girl Up began from a group of girls who wanted to feel accepted. The club is focused on fighting for female rights and equality. All genders are accepted as well.

Ms. Fishman, the advisor for Girl Up and a feminist, tells you everything you need to know about it and so much more.

Q:What is Girl Up?

A: So for students who don’t know, Girl Up is a feminist club, it’s part of the United nations. So, it’s an actual, global organization. So we just have a chapter here in Solon. But, the feminist piece, but what a lot of people don’t understand is that with feminism, it’s not about making women better than men or girls better than boys. The idea is that we need to lift everyone up. So anyone who’s been marginalized in society, we want all of those people to have equality. So there’s this concept of intersectional feminism where like, I’m not just a woman, right I have all these different parts of my identity and where those intersect. We want to make sure that everybody has equality across those intersections. So that’s essentially what Girl Up does is we raise awareness about issues facing women and minorities, both here in Ohio, in Solon, in the United States and around the world.

Q: What made you want to be a part of this amazing organization?

A: So several years ago, a couple of students, came to me, It was an organization they wanted to start. I don’t know if they’d heard about it from another school. And so they came to me, and it sounded so exciting. I’m a big feminist myself. I am really excited about pushing for equality. I love the work we’re doing here at the high school. It was already something that I was really passionate about, so it was the perfect fit.

Q: Since COVID, how has it affected girls or how has COVID changed it?

A: So last year was tough, but we were really fortunate because we still had about 20 people at meetings, which was awesome because I think a lot of clubs just didn’t even meet. So the fact that we were even still able to meet on Zoom was really, really amazing. It was much more conversation based last year, getting on zoom and just having conversations or trying to watch little videos, but we were obviously pretty limited. We were only able to do one fundraiser last year, and we did a virtual paint night. So we did a girl power painting on Zoom. It was really fun. My, own children participate[d] as they made their own canvases as well. That was really awesome, but hopefully this year we’ll be able to do some more fundraisers. And obviously because of Covid, we are seeing, I think the heightened inequality for so many people, and that’s where that intersectionality comes in. So I think we’ll really try to target the people that are struggling the most. And those, I think those groups of people have been really highlighted because of the pandemic.

Q: Where do you see Girl Up being in a couple of years? Let’s just say five years from now.

A: I would say we will probably continue to grow, in-person we usually have about 30 people at every meeting on average. Our events started out like really smaller. [At our] very first event, we had one event our first year and we watched “I am Malala.” So we did like a little screening, and we raised some money and gathered funds or gathered materials for Laura’s Home. So we got feminine care products and food. And then did like a little bake sale and all the money and donations went to Laura’s Home. And since then, we’ve been able to help fill this house, which is an organization in Bay Village here in Northeast Ohio for students that are aging out of foster care. We have been able to do a school cycle program and that helps girls internationally ride bikes that they can ride to school, but not only that, they actually learn how to fix the bikes. So if something happens like they’re empowered, then they’re not then reliant on someone else. They can actually get to school in a safe way and they’re empowered to make the changes they need if they need to, to those bikes.

Girl Up is for men and women who are looking to fight for equality. You can join Girl Up by by contacting someone within the club like an advisor or club president.