Halloween costumes to keep an eye out for this year 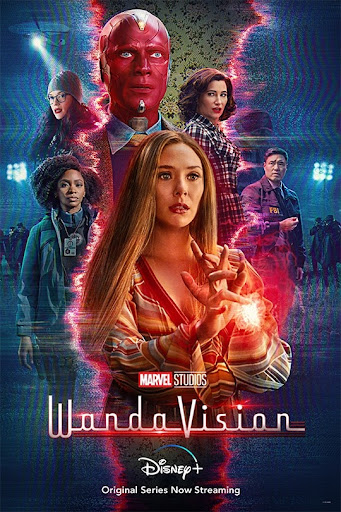 Elizabeth Olsen (left) and Paul Bettany (right) as Wanda and Vision in Wandavision (2020).

Last year, COVID-19 caused many cancelations of events and holidays, one of those being Halloween. Kids were unable to trick-or-treat and didn’t get much out of the spooky holiday. This year, because of the vaccine, more and more people can go out to Halloween parties and dress up in their most creative costumes. Here are some costumes to look forward to this Halloween season.

Throughout 2020 and 2021, Marvel released new shows on Disney+, focusing on different superheroes and their stories. “WandaVision,” “Loki,” and “The Falcon and the Winter Soldier” were all released within months of each other and were huge hits, specifically “WandaVision.” This was the first show Marvel released that focused on Wanda’s life after the death of her husband, Vision, in the 2018 film, “Avengers: Infinity War”. In the Halloween episode, their costumes pay homage to the characters’ original outfits in the “Vision and Scarlet Witch” comics. Because the show was, and still is, a major success, it’s likely that many fans of the show will dress up as characters from the show for Halloween.

Towards the fall of 2021, the Netflix original series, “Squid Game”, became immensely popular. This show is about hundreds of contestants competing for a huge cash prize, with deadly twists along the way. Throughout the competition, players are watched carefully by guards dressed in red jumpsuits and black masks. The players wear emerald green prison-like jumpsuits with a number on their chest, which they are referred to as since they can’t use their real names. Since this show has taken over the entertainment world, many people will be dressing up as either the guard or a player for Halloween this year.

The death of Princess Diana in 1997 shook the world to its core. Involved in a terrible car crash, the princess of Wales’ legacy lives on. During her time in the royal family, her fashion game was on point. She wore brands such as Versace, Gucci, Chanel and Armani, just to name a few. When not rocking the fancy brands, she wore classic 80s and 90s streetwear. Princess Diana broke barriers with her clothing choices: crewnecks, biker shorts, high-waisted jeans, button-downs, etc. In this day and age, more and more teens are using Diana as a fashion icon. Because 90s street style is making a comeback, teens are looking to Princess Diana’s outfits for inspiration. The princess of Wales is a role model for many aspiring fashion designers, and dressing up as the style queen will be good practice for their futures.

Similar to “Squid Game”, the hit television series, “Money Heist”, is a contender for this year’s costume lineup. As a Spanish-dubbed Netflix series, “Money Heist” follows “The Professor” and his recruits while they try to pull off one of the biggest heists in history. The heist consists of printing billions and billions of euros in the Royal Mint of Spain, and the costume design in this show is exquisite. The Professor’s team wear blood-red jumpsuits and Salvador Dali masks to cover their identities. This costume, for sure, will be worn by millions of fans of the show, since it was such a big hit.

When “Black Widow” first came out last July, theaters all over the world went ballistic. Ticket sales were through the roof, and the movie is still a growing success. It continues the story of Natasha Romanoff, the Black Widow, and her disturbing past while reconnecting with her sister, Yelena, along the way. In this film, the audience discovers more about Natasha’s past and how it pushed her to fight for herself, and eventually become part of the Avengers. Marvel fans know Black Widow’s hairstyle changes throughout the film series, but her wardrobe changes as well. It began with the classic slick black bodysuit she wears in the first “Avengers”, to the vest she wears in “Infinity War” (which is the same vest that Yelena wears in “Black Widow”). In the movie, Yelena is very passionate about how cool her vest is, and because of that, that vest was passed down to her sister. Many young girls look up to the two sisters and will dress up as them for Halloween.

These are just a few of the many costumes that will be worn by people this year. Over the past two years, more and more television shows are coming out, setting up ideas for Halloween costumes. People are looking forward to celebrating the spooky holiday somewhat normally this year, so make sure to keep an eye out for these costumes! Happy Halloween!