Solon High School’s only female wrestler, McKenzie Thomas, is ready for the mat 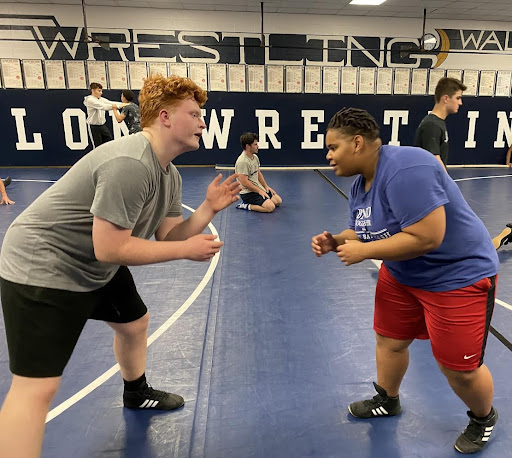 McKenzie Thomas in action (pictured on the right). Photographed by Coach Audie Atienza

Solon High School (SHS) has been trying to add more gender diversity to the athletic teams, according to wrestling Coach Audie Atienza, as well as other athletic departments. The SHS wrestling team has a new member this year, who’s currently the only girl on the high school team.

Wrestling’s off-season practice and workouts started in June and will end Nov. 11, which is when the season starts. Off-season practices are shorter than seasonal practices, which are longer and require more contact wrestling. The first tournament takes place the first week of December. Solon hosts the Comet Classic on Dec. 7, which is the first match of the year.

Junior McKenzie Thomas, was open minded about joining the wrestling team, considering her freshman year she had a knee injury that ended her season. This year she wanted to make up for lost time, since last year she expressed how she didn’t wrestle due to fear of getting COVID.

“[I wanted to have] an open mind about stuff, [and] try new things,” Thomas said. “I did [wrestling] my freshman year, and I didn’t do my best. I got out because of my knee, [so] this year I’m ready to just do my best.”

In order for Thomas to do her best, her coach and her teammates have been helping her achieve that goal. Audie Atienza, the high school and middle school wrestling coach for Solon, expresses how Solon hopes to expand the girl’s wrestling program so that they could fill a whole team for girls-only competitions.

With that being said, Thomas has created some good friendships throughout the team, namely Malakhi Sharpley and Christian Schroeder, who are both junior wrestlers on the SHS team.

“[She has] for sure [gained respect],” Sharpley said. “I feel like it isn’t given respect, I feel like it’s earned respect. Because her going to every [practice], having that resilience, and having that tenacity really earned her a lot of respect, not only [with] other wrestlers, but those who are around her. I feel like [she] sets a good example for everybody.”

Schroeder expressed how he enjoys having McKenzie as a teammate, and he, as well as the rest of the team, see her as just that.

“For her being the only female, she might think we view her differently, but I know personally, and I know a lot of the other guys look at her as a teammate, not as a female. Just like we look at each other as teammates, not as males.”

Thomas has her first match Dec. 3, and she is starting to feel the pressure.

“[I’m] very nervous. It’s like my second time being in front of people and actually performing, and [I feel like] I’m somewhat prepared,” Thomas said. “I have to get better at [my] strategy and skill.”

Christian Gau, who is a senior on the wrestling team, claims he doesn’t know McKenzie that well, but says she seems to be one of the most dedicated people on the team.

Wrestling takes strong dedication and hard work. All of which Thomas’ teammates and coach express she does well.

“As far as strengths go, McKenzie is a very focused and determined wrestler,” Atienza said. “She has shown dedication to learning a new and difficult sport, and is doing everything she can to become better with every workout. McKenzie has no weaknesses, we are approaching her lack of experience as an opportunity to make monumental strides in the sport of wrestling.”