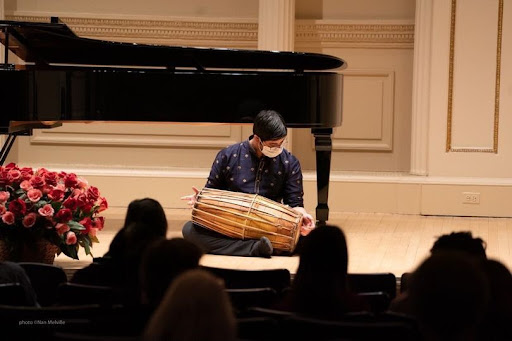 “I do play alone, but the way the instrument kind of works in Indian culture is that it’s used as an accompaniment instrument for a vocalist or a violinist,” Kalahasti said. “So there’s two aspects – there’s a solo aspect to the drum, but there’s also an accompaniment aspect with melody.”

For Carnegie Hall, Kalahasti opted to play a rhythmic composition which he arranged himself.

“The piece that I ended up playing was kind of a combination of different things that my teacher had taught me,” Kalahasti said. “So then I kind of just picked aspects of it that I felt showed different ways that you could play and different sides of it, so I kind of mashed those things together and adjusted it slightly for it to flow a little bit better and then I ended up playing that. I don’t think there’s a specific name to what it is.”

Kalahasti explained how he got the chance to perform at Carnegie Hall.

“There was this competition back in springtime of 2021,” Kalahasti said. “And from what I can recall, it was basically where the winner of specific categories would go and play at Carnegie Hall, so I won the instrumental category, so that was how I was allowed to go play.”

Kalahasti describes his experience performing as stressful, from both a social perspective and a performance perspective.

“I was debating a little bit, ‘do I go in a normal suit and tie, or do I go in Indian cultural clothes?’” Kalahasti said. “So I opted to go in Indian cultural clothes, which is very odd, sitting with 20 other people who were in very, very formal tuxedos and dresses. I felt very, very out of place holding a drum. The actual playing was also slightly stressful because it’s not an instrument I’ve played in front of too many people – the most people I play in front of are students who learn from the same teacher and the teacher [themselves], so that was a very traumatic shift.”

The journey from picking up the instrument and playing at Carnegie Hall began during the spring of Kalahasti’s freshman year in 2019. Although performing at the prestigious stage was an accomplishment for him, Kalahasti was mainly inspired to play for the chance to interact and engage in his culture.

“Indian music was always something that my parents had forced on me before,” Kalahasti said. “Then, when I started growing up, I was like ‘okay, this is starting to be more fun’ because learning independently is always kind of boring, but when you start learning with other people or playing with other people, then it becomes a lot more fun to engage and it just gives you a lot more opportunity to explore your own skills and how it is playing with others and adjusting to different styles.”

Kalahasti was also motivated to play because of an enjoyment for music in and of itself.

Kalahasti’s mother, Priya Kalahasti, was thankful for her son’s opportunity.

“It was an incredible honor and a very humbling experience,” Priya Kalahasti said. “For this we are extremely grateful.”

“Barring any major complications, like whether my dorm roommate objects – he probably will – then I am cautiously optimistic that I will be able to play in the future,” Kalahasti said.

As for the distant future, Kalahasti isn’t sure what’s next in terms of a potential career in music. However, he’s keeping an eye out for the possibilities that interest him. Whatever the future has in store for him, he’ll be marching to the beat of his own mridangam.

“I know there are professional opportunities that are certainly there, but I think as of now, there’s a little bit of waiting and watching – like do I want to pursue that avenue?” Kalahasti said. “I certainly would like to play concerts, especially accompanying more melodic artists like carnatic violin or vocal but also doing fusion things, maybe, is also an avenue that I’ve thought about. I guess just waiting and watching and seeing what kind of opportunities come.”