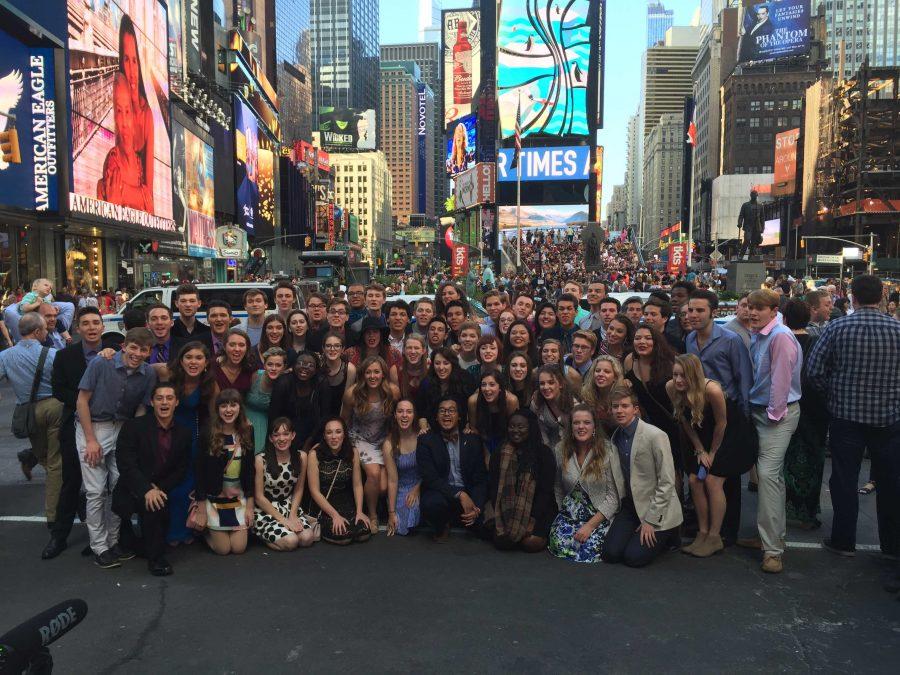 After winning the Best Actor award at the Playhouse Square Dazzle Awards (to read more about the Dazzle Awards, read this past Courier story), Solon High School sophomore J.R. Heckman was invited to  to participate in the 2016 Jimmy Awards in New York City as a nominee.

According to his parents, John and Lisa Heckman, J.R. had to prepare several vocal selections from Broadway musicals prior to leaving, including some from “Shrek the Musical,” which he won his award for. He also had to find a wardrobe for the awards program

“Playhouse Square provided me the opportunity to work one on one with the head of the Baldwin Wallace University Theatre Department Vicky Bussert [to prepare my selections],” J.R. said.

“When we arrived in New York,  [Hahn], [Klika] and I decided to go see ‘Fun Home’ before [Klika] and I were called to start rehearsing for the first time at Tisch School of the Arts.”

J.R., [Klika] and the other 62 nominees from around the country rehearsed the production numbers for the awards show every day for 5 days from 7:30 a.m. to about 10:00 p.m. at the Tisch School of the Arts facilities.

In addition to the big group numbers, which included songs from current Broadway hits such as “Waitress,” “Hamilton,” “Aladdin,” “The Color Purple,” “Shuffle Along,” “School Of Rock,” “Fiddler On the Roof” and “She Loves Me,” each nominee had a Broadway mentor to assist in preparing their individual numbers.

“My coach was Howard McGillin, one of the longest [running] Phantom’s [in ‘Phantom of the Opera’] on Broadway,” J.R. said. “One of the best pieces of advice I got [from him] was that you always have to be telling the story with the goal to affect and touch the audience.”

As rehearsals for the awards show wrapped up, J.R.’s family arrived in New York to see him perform and to experience New York City.

“We had J.R.´s 100-year-old great grandmother with us, so we did a lot of sightseeing, saw ‘School of Rock’ and took Joseph [J.R.’s younger brother] to a Yankees game,” Lisa Heckman, J.R.’s mother, said.

The awards ceremony was held on June 27 and hosted by “She Loves Me”’s Zachary Levi. J.R. and his fellow nominees performed on the Minskoff Theater stage, the home of  Disney’s “The Lion King,” in front of acclaimed Broadway composer Andrew Lloyd Webber and various other industry professionals.

“Performing on the Broadway stage was an indescribable experience,” J.R. said. “When we first started the opening number I was in my element and I felt like I could do anything.  My favorite part was definitely performing in New York, on a Broadway stage, in front of Andrew Lloyd Webber.”

J.R.’s family was also ecstatic about the experience.

Although J.R. did not win at the national level, he still benefitted from his involvement.

“I am currently working a lot more on developing my character in my pieces and telling the story with more emotion as I sing,” he said. “I am very grateful to have had such an amazing opportunity and very proud to represent the [SHS] Drama Club.”